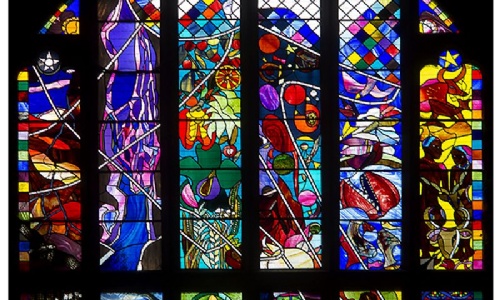 We have received this lovely obituary from two ‘old girls’ of Camden School for Girls, remembering their school friend, Rosalind Grimshaw. Rosalind became a famous stained-glass artist; her works included the Creation Window at Chester Cathedral which incorporated one of Rosalind’s brain scans as part of her treatment for Parkinson’s Disease. Rosalind sadly died on 11th November 2020 aged 75.

We were shocked and saddened to hear of the passing of Rosalind, who spent the past few decades years defying Parkinson’s  Disease, and fighting to continue  creating  outstanding works of art. We are writing as her school friends who had the pleasure of being at Camden at the same time as Rosalind.

Ros was one of the first cohort of pupils that started at Camden in the new building in Sandall Road in the Autumn Term 1956. She was academically bright, inquisitive and had a great sense of humour but, her real talent and interest was in art. As we approached the 6th form, the school acquired the first building on Camden Road that eventually led to its expansion. Doris Burchell the then Head let us use part of that house as a common room and Ros played a significant part in the decorative revamp of the premises.

At that time for both the school and her family, academic prowess was valued far above any artistic skill but, Ros had the courage to go against the tide and fulfil her passion. She really started to flourish when she went to art school. She studied for her Foundation Diploma at Ravensbourne and went on to complete her degree in Brighton. She trained in stained glass at the studio of Joseph Bell in Bristol and this became her passion.

Ros was diagnosed with Parkinson’s after a bicycle accident when she was 35 but continued to produce wonderful stained-glass pieces and won a competition to create the magnificent refectory window in Chester Cathedral for the millennium. When the Parkinson’s began to affect her work, her partner Patrick Costeloe provided the assistance she needed to complete her designs.

Ros married John Grimshaw and they had four children before getting divorced. It is an achievement in itself that she managed to live for 35 years with a progressively deteriorating and awful disease, but she was so disciplined that she kept it under control and did not let it dampen her spirit or prevent her working.

Ros was a strong personality, who knew her own mind, was plain speaking and totally true to herself. She had a wonderful, wry sense of humour, could cut through hypocrisy, was sharp as a button, radical and courageous. She was a campaigner like many of us that started while we were at Camden and she became a member of CND. Ros remained passionate about making changes that would improve life. She will be much missed.